Looking out amid miles of sand, many desert travelers have spoken of seeing images of water. Nicholas Reichenbach, however, had a vision of a water company.

Reichenbach, founder of Flow Water, had his entrepreneurial epiphany during that most influential American festival of inspiration, Burning Man. After attending the gathering several years ago, he looked out onto its desert home on the final day — and saw thousands of discarded plastic water bottles. Inspired to create a more sustainable packaged water, he returned home to Ontario, Canada where, utilizing his own artesian spring, he connected with paper carton manufacturer Tetra Pak to launch Flow, a pH 8.1 alkaline water, in 2014.

Flow is one of several paper-packaged water brands to launch within the past several years, alongside Boxed Water in 2009, JUST Water in 2015, and ReThink Brands in 2016. Each promising a high-quality beverage in recyclable packaging, these still-small, environmentally minded brands all seek the common goal of disrupting the plastic-consuming, $16 billion and growing, bottled water category. Although they still only make up a fraction of the category, innovation and unique marketing strategies within the paper-packaged sector are driving growth and attracting loyal, socially-conscious consumers, banking on millennials to lead the charge.

“We are at the beginning of a generational revolution that’s going on,” said Rob Koenen, CMO of Boxed Water. “I’m 50 and I have never seen this before. The millennials are now 20 to 37 years old and the largest spending age group in America and they are crazy passionate about the environment. They realize there’s an issue and we’re at this crux where 10 years ago, 15 years ago, these conversations weren’t happening.”

Boxed Water has been steadily growing its market presence over the eight years since its launch. With its original full company name/tagline “Boxed Water Is Better,” the brand made its packaging format its entire identity, a strategy based on appealing to the environmentally conscious consumer. In recent years the company has driven brand awareness through efforts like the Retree Project, an ongoing campaign begun in 2015 to fund the planting of trees.

“We are partnering with a lot of like-minded retailers who believe in the cause and believe that there needs to be an alternative to plastic, and we’re doing promotions and philanthropic actions to help the community,” Koenen added. “And in the end, grow our business, but frankly it’s not about growing the business about doing what’s right. And we think if we do what’s right the business will follow.”

Next autumn, Boxed Water is launching a new environmental initiative called Coastal Cleanup, a campaign to clean up litter from American beaches. The company has also worked with its retail partners to deliver water to Florida and Texas for hurricane relief, which Koenen said is an opportunity to give back to communities in direct ways.

But despite the obvious social mission, there is still a lot of consumer education to be done before the category can begin to approach the dominance of plastic bottles. 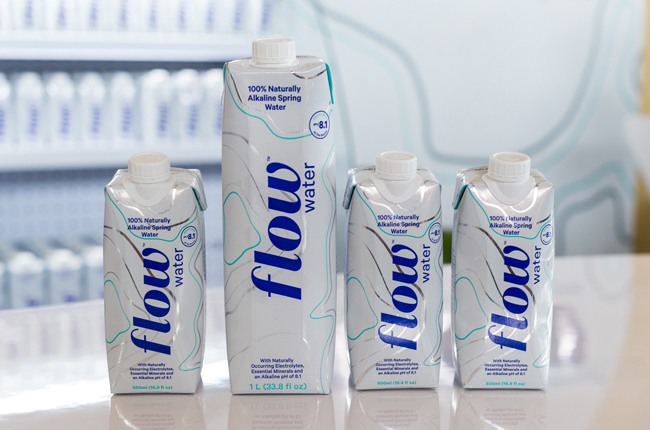 “A lot of point of sale that we create is about how the packaging is better than plastic and why that’s better for the environment,” said Cambria Guernsey, senior brand manager at Flow Water. “But it’s new. There’s definitely a bit of a learning curve there.”

According to Guernsey, environmentally conscious consumers do make for strong repeat customers who actively seek out sustainably packaged waters. However, for Flow Water, its premium positioning — as a high-alkaline water — also is intended to serve to attract those less influenced by the brand’s social mission.

The brand is entering Whole Foods nationwide in October at an SRP of $1.49 for a half-liter Tetra Pak carton, or $2.29 for a 1L size. The company also recently open its own packaging facility to keep cost of goods down, Guernsey said.

Presence in retail for the paper-clad subcategory has grown considerably in the past three years, according to Eliseo Barcas, vice president of sales management for ambient packaging at Tetra Pak. ReThink Brands, he said, serves as a prime example of how such a brand can grow its distribution footprint quickly, having recently entered Target, Walmart, and Kroger.

“What these guys [ReThink] do is they establish themselves in big cities like New York and L.A. and they go from there, building the brand and the concept,” Barcas said. “They go slowly, but constantly moving step by step, and they are doing great. It will take time, it’s not immediate.”

In fact, any change will likely take a long time, given the numbers. With shoppers dropping soda and gravitating toward water, sales in the category increased from 11.8 billion gallons in 2015 to 12.8 billion in 2016, according to a report by industry analyst group Beverage Marketing Corp. PET bottles are everywhere, and they’re cheap: private label water packaged almost exclusively in plastic makes up more than double the dollar sales of the largest brand, Dasani. Aquafina and Nestle Pure Life round out the top brands. Even with advantages, such as JUST Water’s celebrity influencers, which include Will and Jaden Smith, paper-packaged brands are facing a true David vs. Goliath challenge if they want to someday topple plastic.

But one way these companies are strengthening sales is through exclusive partnerships and highly unconventional channels. This summer, JUST Water announced it signed a contract with the Houston Zoo to be the only non-reusable packaged water sold on premise.

In a press release from July, a Houston Zoo spokesperson stated the organization’s intention of moving to a more environmentally sustainable business model in order to protect wildlife. The company also announced intentions to eliminate the use of plastic bags, encouraging its guests to purchases reusable tote bags. Such conscious businesses have proven to be valuable partners for paper-packaged water brands.

“Outside our valued traditional retail channels, in the past year, we’ve partnered with public venues from college campuses to cultural locations such as zoos, museums and music venues as other areas of distribution that also have progressive sustainability goals,” said Kara Rubin, vice president of brand and product strategy at JUST Water. “Many of these venues share the mission of recognizing the need to be good community partners by leading environmental initiatives and being role models in their towns, cities and communities.”

“There is a natural synergy with people going to zoos and wanting to help the environment,” he said. 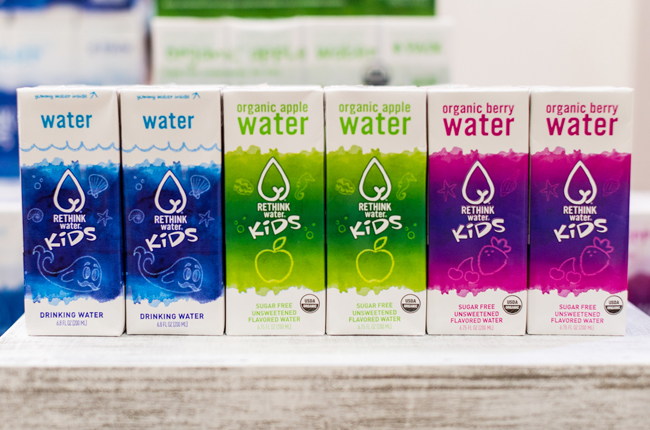 What is also beneficial for the young paper-packaged water sector is that the road is wide and clear for new innovations to drive growth.

“We’re really focused on beverage, the line extensions within it, and ultimately we can do anything with the ReThink brand,” Swanson said.

The expansion into other categories follows the company’s launch in May of ReThink Kids, a line of water and flavored waters for children that are packaged in juice box cartons. The 200 mL kids drinks are sold in bulk packs of eight cartons and include unsweetened organic and berry flavored waters. Swanson believes the line also presents a healthy alternative for kids, as so many children’s beverages are full of sweeteners and various additives.

“Water in a juice box literally didn’t exist,” Swanson said. “We first launched the adult line in a half-liter and 1L, and we quickly realized there’s a totally underserved market for children who want to drink water. They drink out of bottles and it ends up all over them.”

At Boxed Water, Koenen did not comment on product innovation, but noted a string of possibilities for how to further innovate the packaging. The company is “constantly looking at” new packaging types, closure types, sizes, shapes, and types of paper.

As climate concerns drive changes in consumer purchasing trends, paper-packaged waters believe they are in a prime position to seize on the fast-growing need for recyclable products in the marketplace. While the trend is small today, there is also some camaraderie between brands. For Koenen, competition is competition, but spreading the conscious message is good business for all of them. As they continue to form retail and food service partnerships with similarly-minded businesses, these companies could thrive in their niche. But it will take a stone smack in the middle of the giant’s forehead to slow the market for plastic any time soon.