This article originally appeared on Euromonitor International’s blog on November 9th, 2017. It was written by Senior Packaging Analyst, Karine Dussimon. The content was republished with permission from the organization.

As global retail sales of packaging increased by 2 percent in 2016, the environmental damage caused by the “make, use, dispose” economy is of growing concern. This is particularly evident in Asia, Latin America and the Middle East/Africa, which are seeing ongoing population growth. The sustainable development of packaging is a pressing necessity ecologically, and also offers opportunities for businesses along the supply chain.

Packaging is a necessity; but so is its sustainable development

Although it varies a great deal by material, geography and manufacturer, the environmental footprint of packaging remains an ecological problem. Packaging’s primary function of protecting its content is, in itself, a sustainable benefit. The EU estimates food waste volumes generated within its member states alone to be 88 million tonnes a year. At global level, the United Nations estimated food waste in 2013 to make up 35 percent of all foods produced. Using packaging for foods extends its shelf life, protects against damage and informs end users on best practice for consumption. The uptake of packaged food at the expense of loose items is widely recognised as a primary means of reducing food waste. A 2014 study by Denkstatt shows how using packaging for certain foods can overall be more positive than harmful to the environment.

On the other hand, the increase in packaging use creates several other ecological problems. The WWF Living Planet Report states that every year, we use Earth’s resources at more than 1.5 times the rate nature can renew them. Like most economic activities, such as oil and apparel production, the packaging industry contributes to the depletion of natural resources such as minerals, wood and water, but also to air, landfill and seabed pollution and to the harm of various life forms. This is caused mainly through the creation of material and toxic waste. According to the European Commission’s Eurostat body, 160kg of packaging waste per inhabitant was generated in the EU-28 alone in 2013. The need for greater sustainability in packaging is therefore widely recognised as an ecological necessity.

Pack volumes (and ecological footprint) is biggest in the developing world

With by far the largest population, the Asia Pacific region dominates global retail packaging volumes, at sales of 1.4 billion units in 2016. The Middle East/Africa is seeing the fastest growth, while the economic slowdown in Latin America is not preventing consumers’ need for everyday essentials growing rapidly. In many places, such as India and Colombia, waste is primarily generated upstream in the supply chain; for instance at the production stage. Much plastic and metal packaging accumulates in landfills and waterways, as recycling remains largely under-developed. 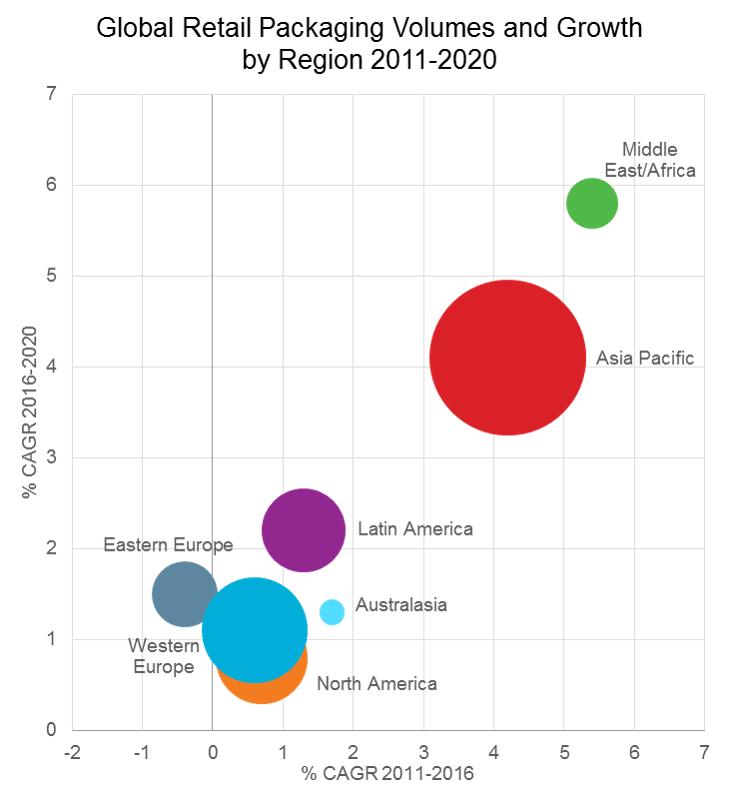 More mature markets, such as Western Europe and North America, are seeing slower yet positive packaging volume growth. Although recycling is more developed, with Scandinavia being a good example, waste is often generated further downstream in the supply chain; such as at end consumption stage, and can still sometimes end up in the environment; or alternatively its incineration results in the emission of toxic waste.

A long-term, holistic approach to sustainability

Packaging only represents part of the entire ecological footprint of a business. With the World Economic Forum 2017 restating the global need to shift to a circular economy, manufacturers and retailers need to look at their overall activities and processes. Ranking systems such as the widely recognised Dow Jones Sustainability Index assess a group’s corporate sustainability. The creation of long-term value, involving the least natural resources possible, is increasingly in focus.